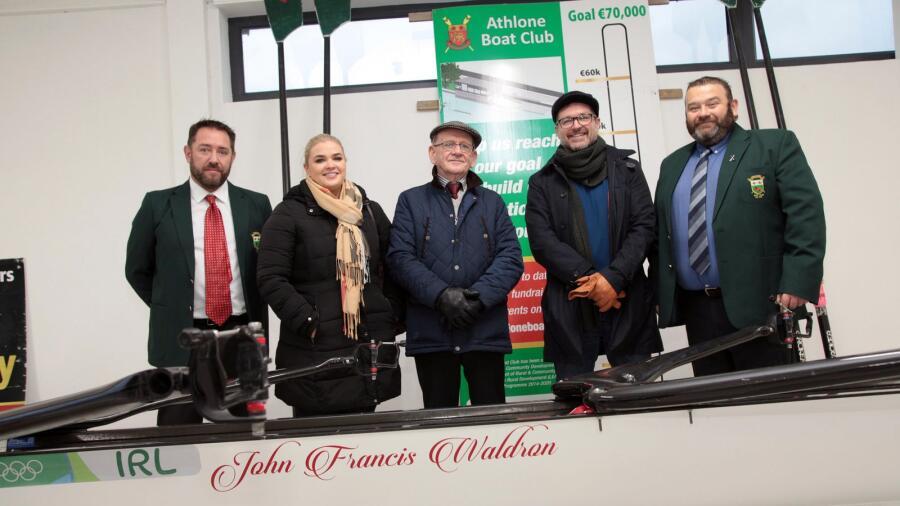 Athlone Boat Club held a small ceremony to bless and name one of their new boats last Sunday. During the year the club held a very successful draw with a prize offering the naming rights to a boat used in the 2016 Olympic Games in Rio de Janeiro.

It was the first time in the club's history that the public had the opportunity to buy a ticket to win the naming rights of a boat within their fleet. The draw in question offered the naming rights to the famous Rio Olympic 2016 double scull boat used by Paul and Gary O'Donovan.

Paul Gallen, club treasurer, had bought the boat and donated it to the club after the 2016 Olympics. It has been in their fleet ever since, and the boat has been known to members as the 'Rio'.

Paul provided all in attendance with a history of the boat and how he came to purchase this historical boat. The club is very thankful to Paul and his family for this kind donation.

The winner of this draw was in attendance with his father. Kenneth Waldron, son of the well-known John Francis Waldron of Waldron's menswear shop, Athlone had travelled home from the United States last week for a family wedding and was delighted that the club held the event on this weekend for him.

Club Captain Nick Friel and President Paul Donovan spoke of the great pride they had standing in the new boat house development with such a historical boat. They both thanked all in attendance and welcomed the Waldron family into the history books of Athlone Boat Club.

Club PRO Padraig Hegarty called on Kenneth to provide everyone with the reason behind the name he selected.

Kenneth explained: “I was very moved by Joe Rantz, he was an American rower in the 1930s, and he came from nothing to achieve Olympic glory. His story 'The Boys in the Boat' truly inspired me and this was the name I had originally chosen. However, on reflection the most inspirational person in my life was my dad John Francis Waldron, and it is his name I wanted to place on this historical boat."

Deacon Tony Larkin provided a traditional blessing of the boat and the new boat house. Tony noted that it was an honour to have received the call from the club to provide this blessing. He blessed the boat with water from the Shannon and asked the small number of members and supporters to reflect on the recent passing of club member Mary O’Grady during the blessing ceremony.

Athlone Sub Aqua Club provided water safety for the event as the boat was placed on the water for its first voyage as the 'John Francis Waldron'.