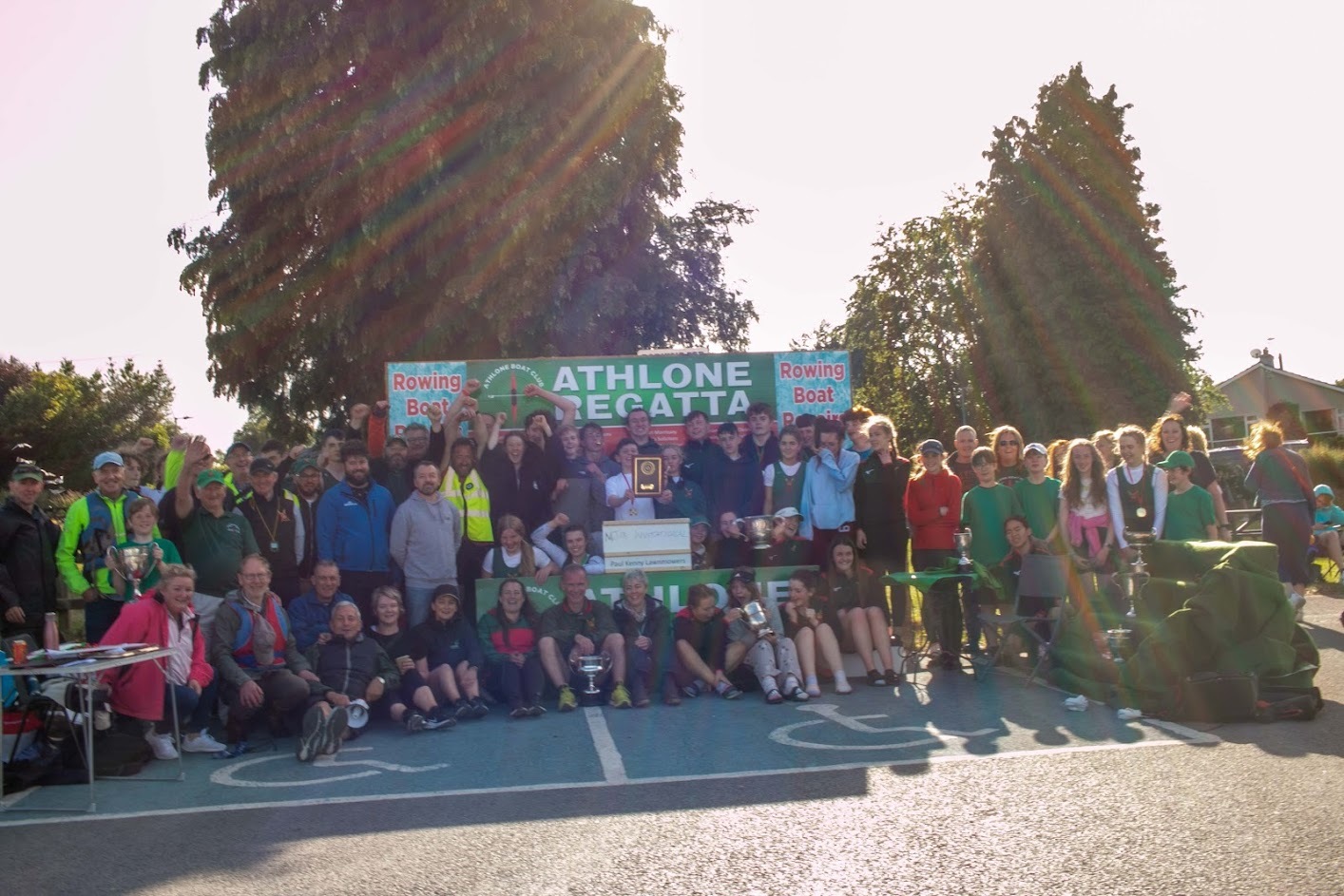 Athlone Boat Club host major successful junior regatta reports club PRO Padraig Hegarty. Athlone Boat Club held their annual regatta at Coosan Point on Saturday 18th of June, 2022. The event was attended by over 27 clubs from across the four proud provinces of Ireland. In total, the club had a whopping 117 races recorded on the day. Holding such an event is no easy task and one which requires massive volunteer hours weeks before and on the day of to successfully ensure that the event can go ahead. The plans for this regatta started back in March with the formation of a regatta committee, this was the grouping of people who ensured the day went off without a hitch. During the week before the course is put into place, this is one of the clubs biggest tasks and one, which requires skill, and professional technical ability from land volunteers to boat volunteers to drop the makers into place. Another major task is the laying of the wooden slipway and the safe set up of the area, which takes massive people power and volunteer hours. The day itself is not possible without local and state agencies supporting with the access to the amenity area, the moving of speed makers at Coosan Point and of course access to the area. Westmeath County Council, Inland Waterways, RNLI, Local Finishing Clubs and the many groups who share Coosan Point all back the club each year with this event. The club is extremely thankful for their support as always.

On the day, the club has massive support from the Athlone Subaqua Club members who are there from the first race to the last race with safety boats, equipment and a large group of qualified diver volunteers and they were on hand to assist with one of the most important functions on the day-water safety. This club plays a vital role in river safety in Athlone. Another aspect of safety was the volunteers of the Order of Malta who also provide critical medical support. Each year without fail, these two volunteer organisations play a crucial role in the running of a safe event for all.

As the events of the day take place this is completed by countess volunteers who give the club massive support and time. From umpires, launch drivers, boat launching officials, catering staff and traffic control. Without the involvement of many people and organisations this day is not possible, the club is thankful to all involved each year with making this event possible but more importantly for supporting with the clubs first ever junior regatta.

On the day the club PRO Padraig Hegarty reports that the positive atmosphere and buzz around Coosan Point was very evident from the first race 08:05 to the last race as 18:10 with regatta secretary John O’Mara declaring the event start and finish. On the day, all clubs were under starters orders by Club President Paul Donovan. He lined up the crews, settled the nerves of the junior oars people and gave all their starting orders. With races starting almost every five minutes there was little time to complain about the wind and cold, or to enjoy the sunshine. Conditions were difficult mid-afternoon, but all crews, junior and senior, got off to a great start. The very fact that the regatta was able to take place this year was a major success for Athlone Boat Club, with the global health pandemic and past regattas cancelled due to bad weather this regatta was badly needed for the club. With the recent new rebuild located in Athlone adjacent to Custume Barracks, the income for this event was warmly welcomed by the club. On the day the weather was good, winds were mild and there were moments of summer sunshine. The atmosphere around Coosan was electric with junior rowers rigging boats, gathering oars and getting ready for their moment to show their rowing ability at Coosan Point in front of clubs and coaches from across Ireland. It was also a day where old friends could meet and talk all things rowing and catch up with life over the past few years. Club icon Sean Flynn was on hand to provide the winning crews their gold medals and veteran Benny Dunne provided commentary of all races as they came towards the finish line at Coosan Point.

Speaking with Club President Paul Donovan “This year’s regatta we focused on junior rowing, with some master’s events taking place on the day. The most refreshing part of the day was the involvement of some of Ireland’s best and brightest young rowers from across the country. All rowers who attended did their clubs proud with many taking home gold medals to complement all their hard work this season”. The overall best club on the day could not have been more fitting with Athlone Boat Club taking the prize (Stephen Doran Cup). Club Captain Nick Friel noted “being awarded the best overall club on the day was a tremendous result and not surprising. Athlone Boat Club, take a bow. This was an outstanding day delivered by an outstanding group of young athletes, coaches, parents, families and volunteers who give so much to the club”.

Like any club, those who back the club make it possible to achieve great success. The club was backed this year by a massive number of local businesses, many of whom have supported Athlone Boat Club for generations. The club is very thankful to everyone for their support, the donations generated allows the club to continue to grow and develop as one of the midlands major success stories in recent times.

In closing, the club President Paul Donovan remarked that “he had taken enormous pride in what was an outstanding regatta. He noted that “our oars people winning the best overall club was the highlight of the day”. The club would like to thank all who made the day possible from the Athlone Subaqua Club and their massive presence from water safety, the Order of Malta for their medical support, the RNLI for their facilities, which is a remarkable building, coaches, club volunteers, parents, Westmeath County Council, Inland Waterways, local residents of Coosan Point and the regatta committee. A special mention to Brendan McEnroe and family for providing parking local to our visit crews and spectators on the day. All clubs from across Ireland now turn their focus on the Irish Rowing Championship this July, Athlone Boat Club would like to thank all clubs for attending and supporting their regatta and would like to wish all clubs the very best in the time ahead.