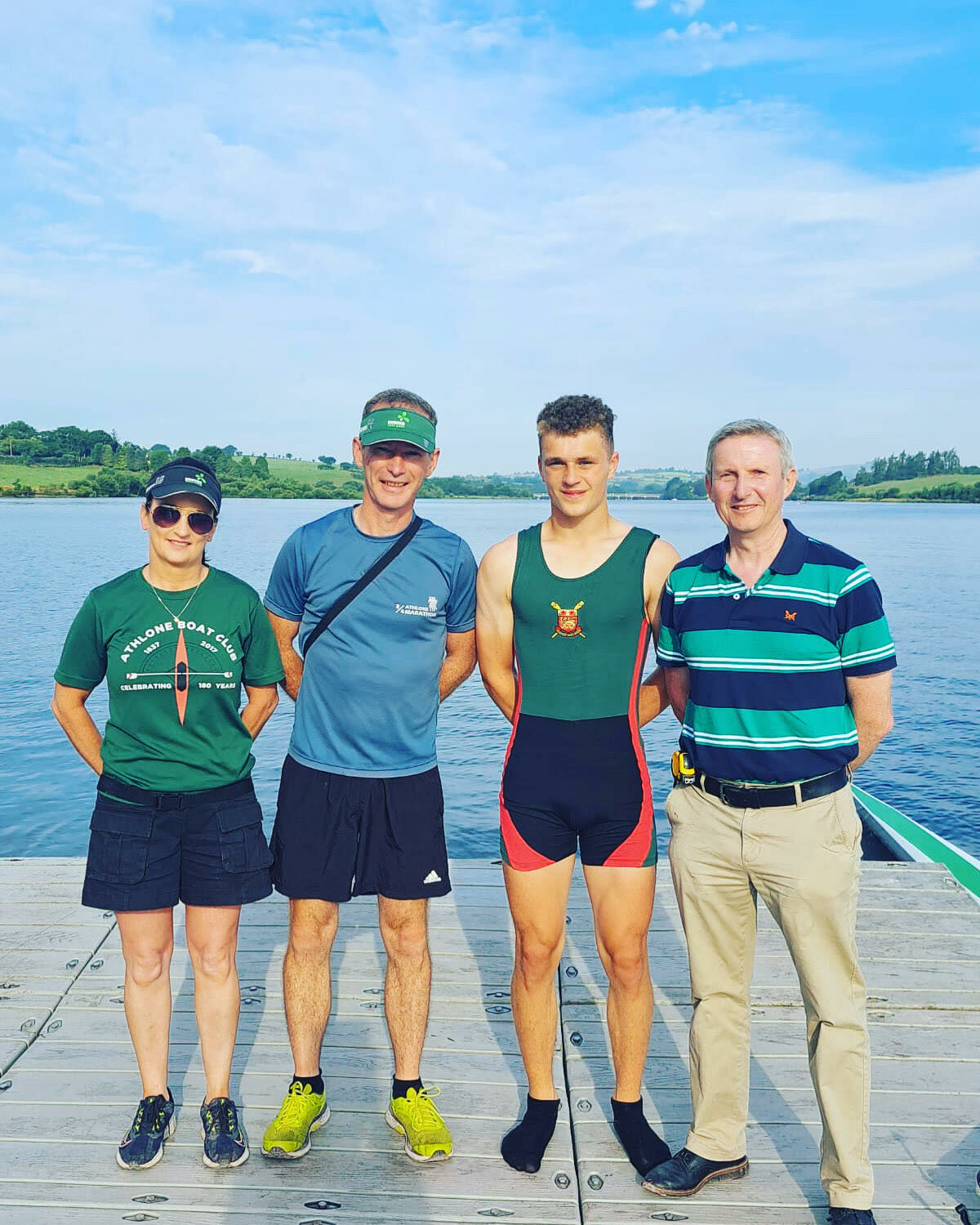 The championships were held over two weekends in July with junior and masters crews first to test their ability and skill against crews from across the island of Ireland.

“The club entered a massive fleet of boats at many different levels who all did the town very proud with their achievements,” said club PRO Padraig Hegarty.

Conditions on both weekends were ideal for rowing with low winds, summer sunshine and live commentary by Rowing Ireland officials, which created a great atmosphere at the championship. This competition is the biggest in the calendar of rowing throughout the island, and to represent your club at this event is a massive honour.

The first win for Athlone Boat Club was achieved by the women’s junior 14 coxed quad of Cara Egan, Sophie Reynolds, Ella Colsh, Sarah Hand and Sarah Rockett. They beat Muckross A, C & D, Shandon B and Fermoy A. At the junior 14 level this season, Athlone Boat Club are unbeaten, which is a remarkable achievement.

Taking home gold in the women’s junior 15 scull was Anna O’Grady. Anna put on a powerful display of rowing to comfortably win her age category. She beat Neptune, Castleconnell, Carlow, Enniskillen and Skibbereen.

In the junior men’s and women’s 14s sculling event, Richard Heaslip and Ruairi Dolan came 2nd along with Sophie Reynolds and Sarah Rockett. All other athletes who represented the club produced outstanding displays with many great races on the day. The future of junior rowing in Athlone is safe with this great group of junior boys and girls. On a side note, the club entered new rowers in the national championships this year; these consisted of junior boys and girls some of whom had only taken up the sport less than a year ago.

In the masters C category, Alan Kenny won gold, beating both Commercial and New Ross crews by three lengths. This was Alan’s first time to compete in the masters category at national championship level.

Another familiar name when it comes to winning for Athlone Boat Club is Paul Gallen. His opponents included Seamus Keating who beat him to 2nd place in 2018 and Tony Corcoran, who beat him in 2019. Gallen got off to a good start in his five-boat race and, by the 500m mark, he was in 3rd position. At 600m he went past Keating and then the battle was on for 1st place against Corcoran. In an exciting finish, Gallen caught Corcoran with less than 100m left and took his first single scull win at the National Championships.

In was can only be descried as a historical race for the club, the women’s junior 14 8s of Aine Bracken, Sophie Gethins, Ella Lough, Jessie Bolger, Cara Egan (cox), Sophie Reynolds, Ella Colsh, Sarah Hand and Sarah Rockett took home gold in the club’s first ever win in an Octuplet Scull. In the club’s history, it had never entered such a boat in the national championships. This group of ladies beat Enniskillen, Muckross A, Fermoy and Shandon. This win is one for the history books of Athlone Boat Club.

One of their coaches Gemma Kiely noted: “This was a proud moment for women’s rowing in Athlone Boat Club. These ladies have put in so much hard work this year, with some great wins along the way. This win was the icing on the cake and it will allow the girls to build on more success next season.”

The junior 14, 15 boys and junior 15 girls also put in fantastic races and showed that they are ones for the future, this season these boys and girls have won at several events across Ireland. Club captain Nick Friel noted: “This season all our young athletes showed great commitment, camaraderie and focus on rowing. We are already looking forward to next season and what these young people can achieve.”.

Donagh Claffey reclaimed his title of the junior 18 single scull event. Donagh put in a powerful race to beat St Michael’s, Neptune and Clonmel, winning by three lengths. In this category there were close to 40 crews who battled it out for the six final positions, and Donagh made this final to take home gold. Donagh rowed for Ireland in the 2021 World Rowing Junior Championships.

The men’s junior 18 quad won sliver in a very close race in a battle for medals, which they fought very hard to claim 2nd place against a highly rated St Michael’s of Limerick crew who took 1st place. These lads (Adam Grace, Thomas O'Brien, Zach Meegan, Donagh Claffey) put in a great display of rowing in this race to take a silver medal for the town.

At the National Championships, the women representing Athlone at junior 18 level were Aoife Hensey, Hannah Seery, Ava Larkin and Ava Kelly. All women put in great racing in their grade but missed out on making it to the finials. These athletes have represented Athlone Boat Club for many years and they have done the club and their families proud over this time.

Another group of rowers that put in a fine display was the men’s junior 16 quad of Adam Kenny, Zach Meegan, Rian Claffey & Liam Rowan. They made it to the final after getting through their first race, and they finished 4th in what was a very close final.

Zach Meegan won in the junior 16 single scull event taking home the All-Ireland championship medal. The club is delighted that Zach has been selected to row for Ireland in the Coupe De La Jeunesse. This past year Zach has been trailing for Ireland in Cork at the national rowing centre.

Club president Paul Donovan extended gratitude to all coaches for their outstanding contribution, time and commitment to the club and our oars people.

“This year our athletes in Athlone Boat Club have won some great races, they have clocked up many miles on land and in the water. This was all down to the huge time, which our coaches give to the club. These coaches are volunteers who commit so much; this year has been outstanding with a large amount of wins for our junior boys and girls. Without the coaching team at the club, we would not be in such a strong position of winning gold and turning out young rowers for Ireland,” said Paul.

If you would like to add photos to this selection, please email athloneboatclubpro@gmail.com 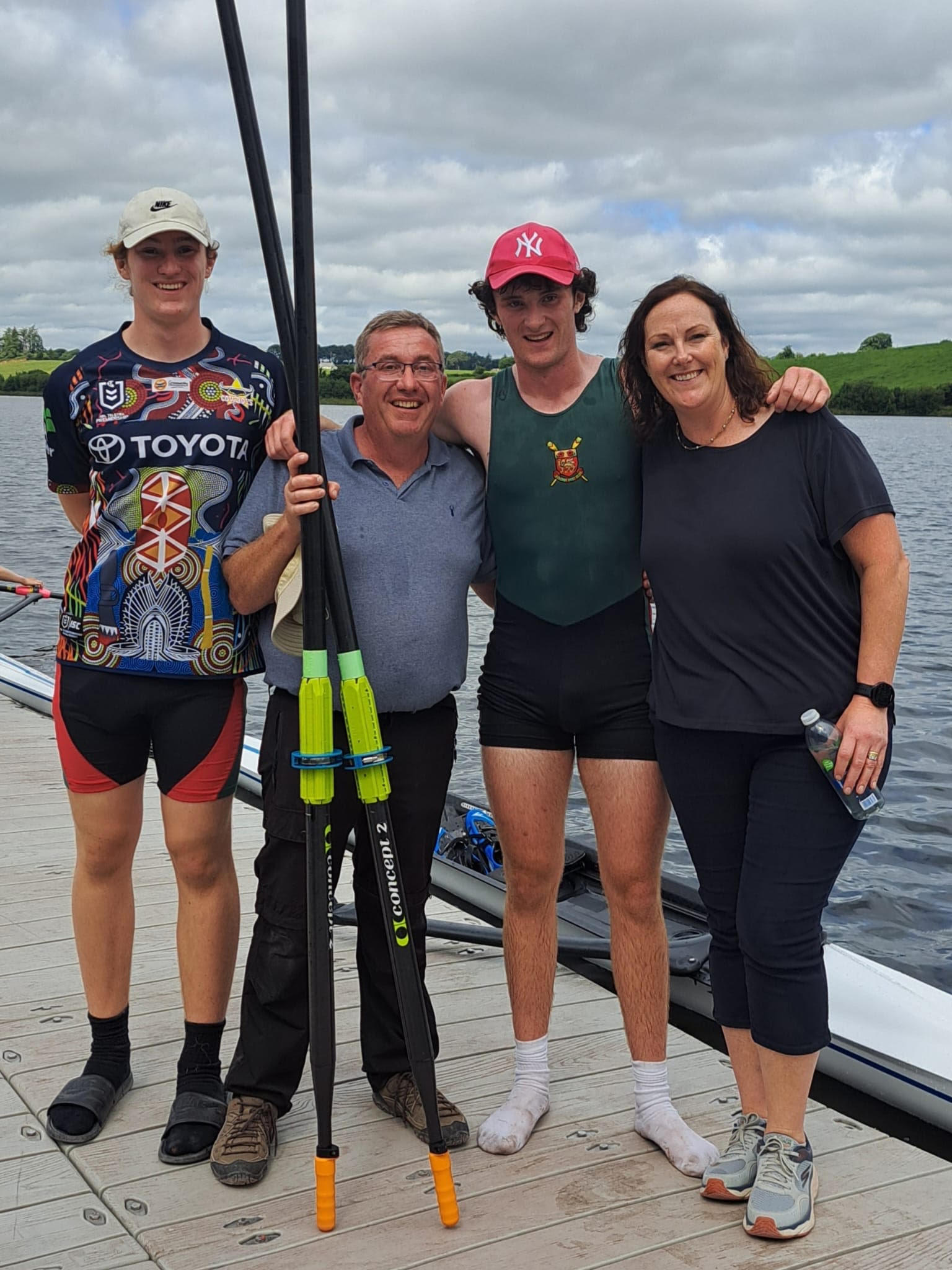 The proud parents and brother with Donagh Claffey after he reclaimed his National Jr 18 Gold Medal. 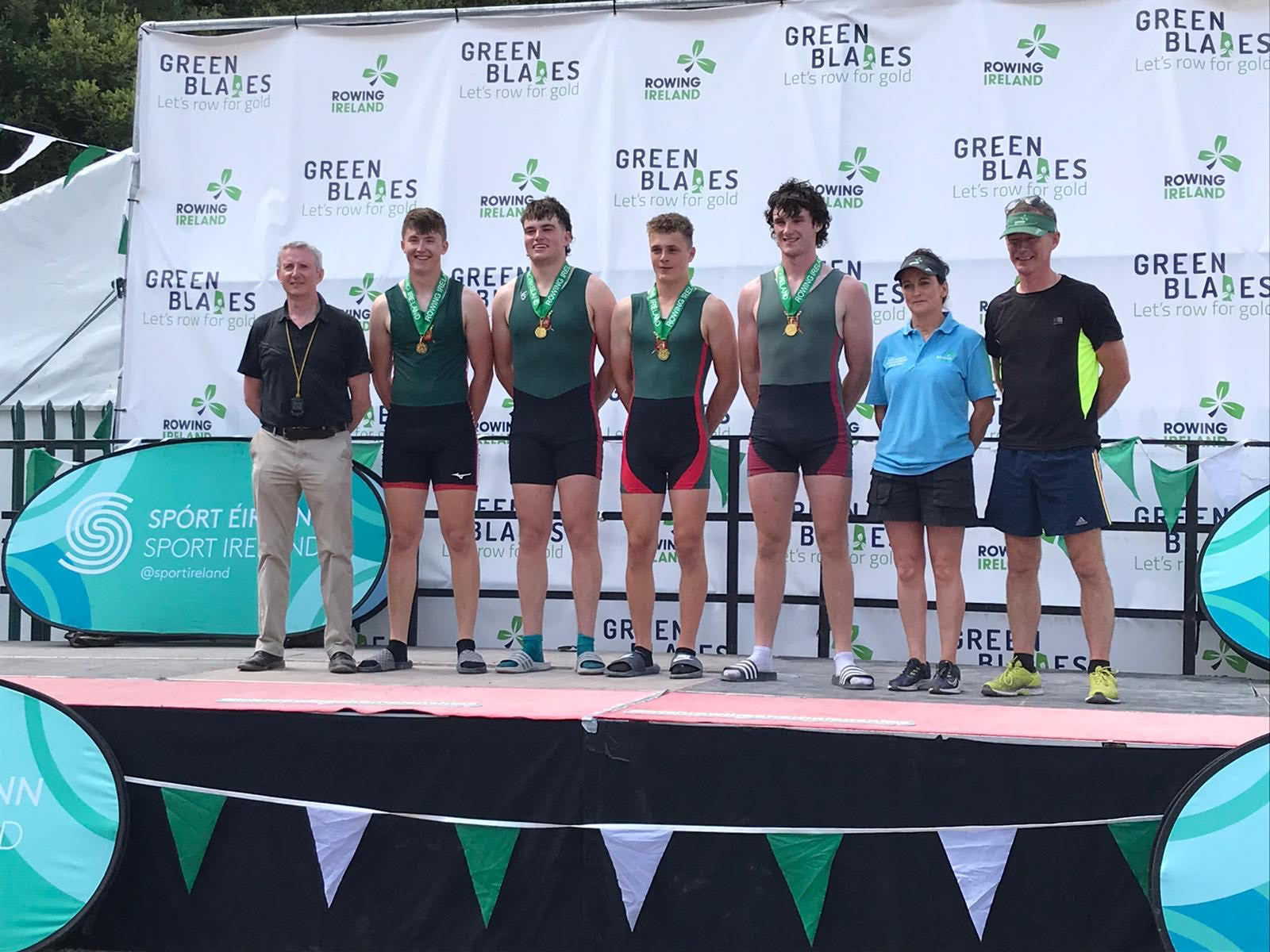 The Jr 18 Quad with proud coaches after their 2nd place finish. 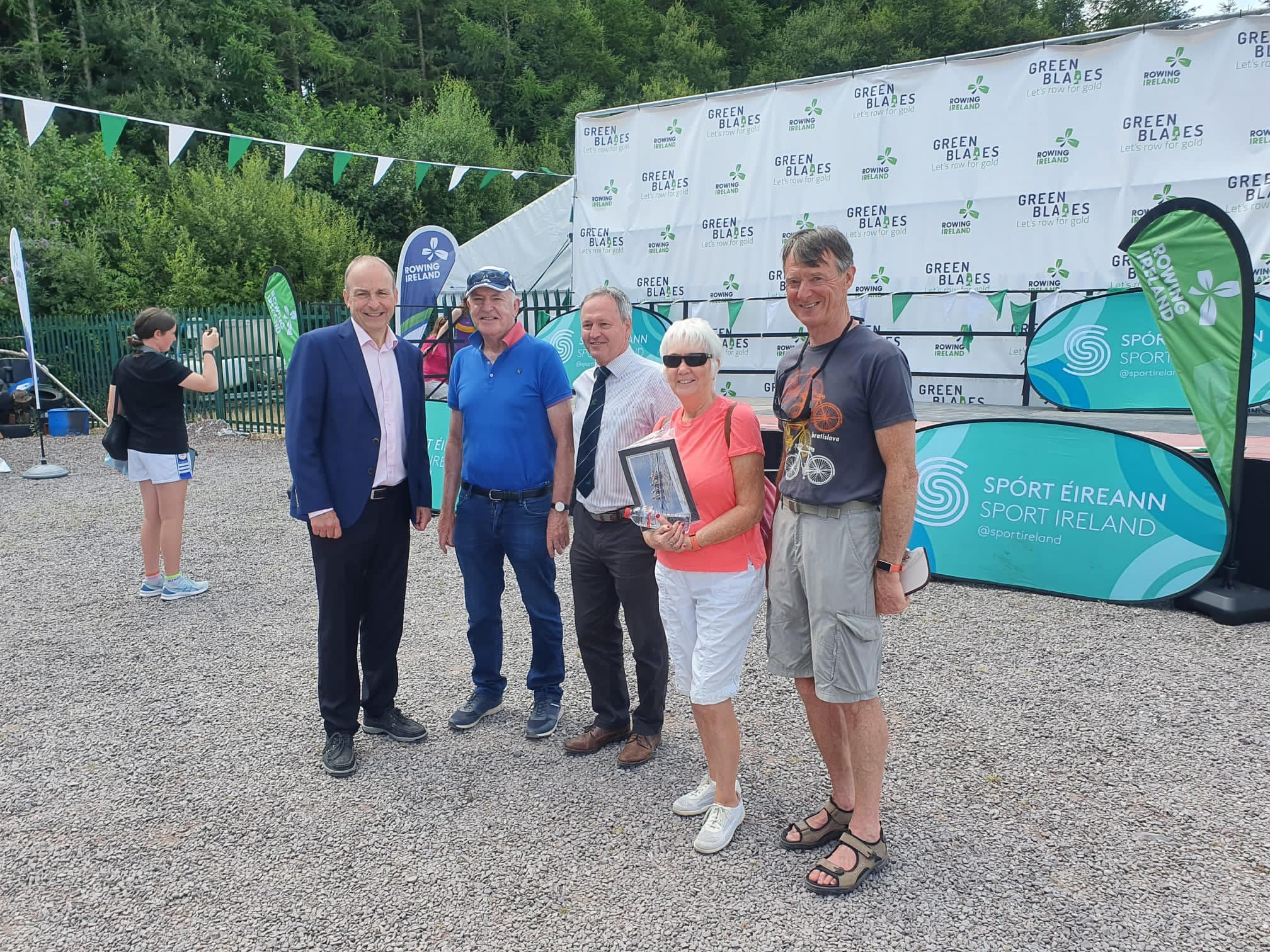 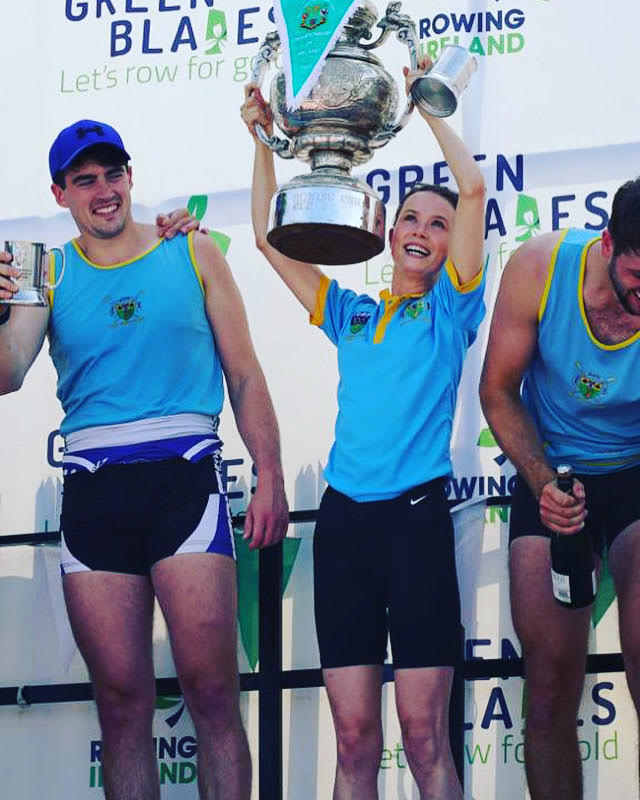 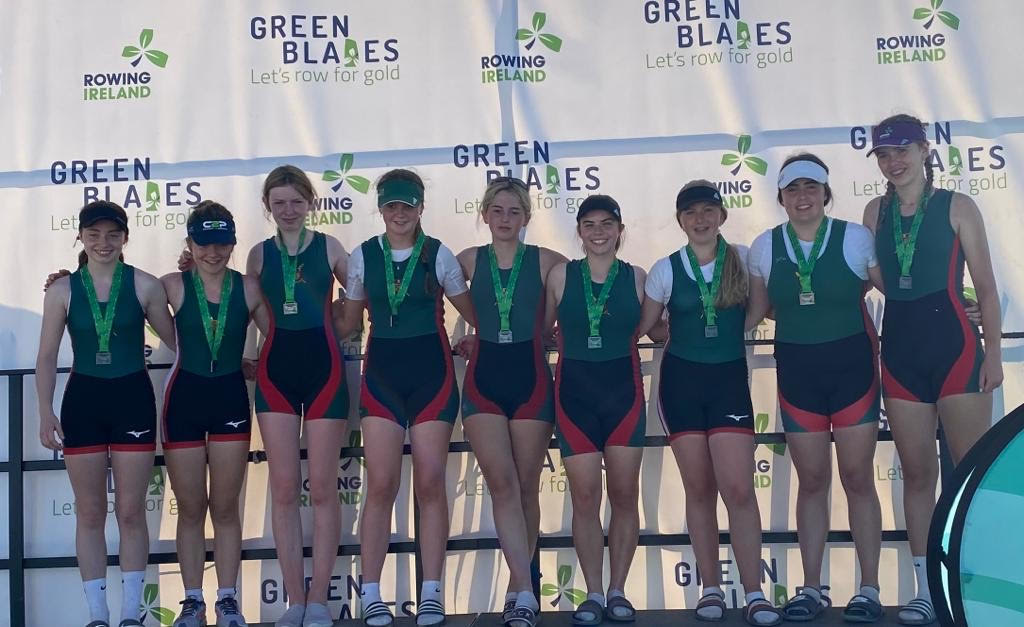 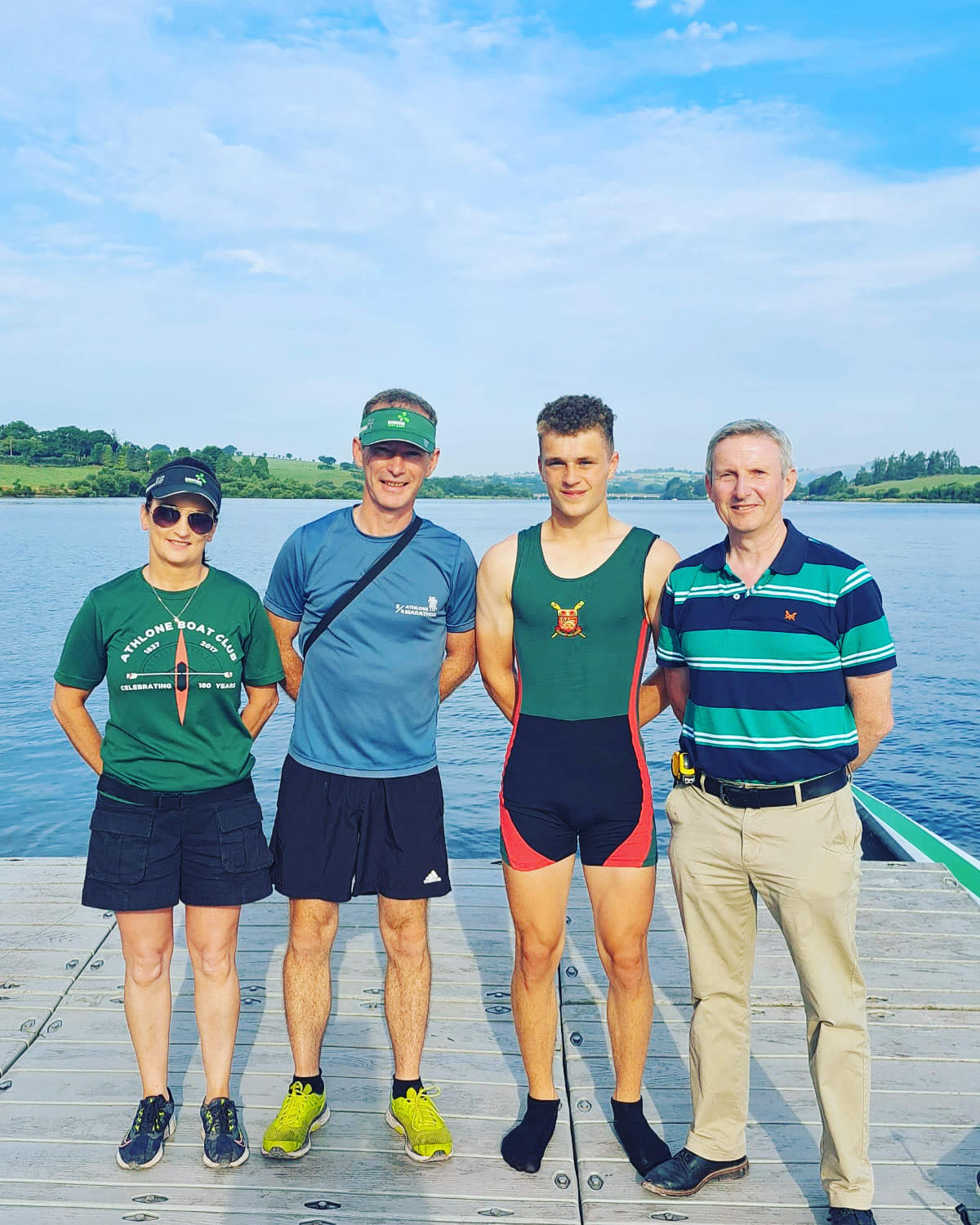 Zach Meegan who won at the Jr 16 event with his proud coaches. 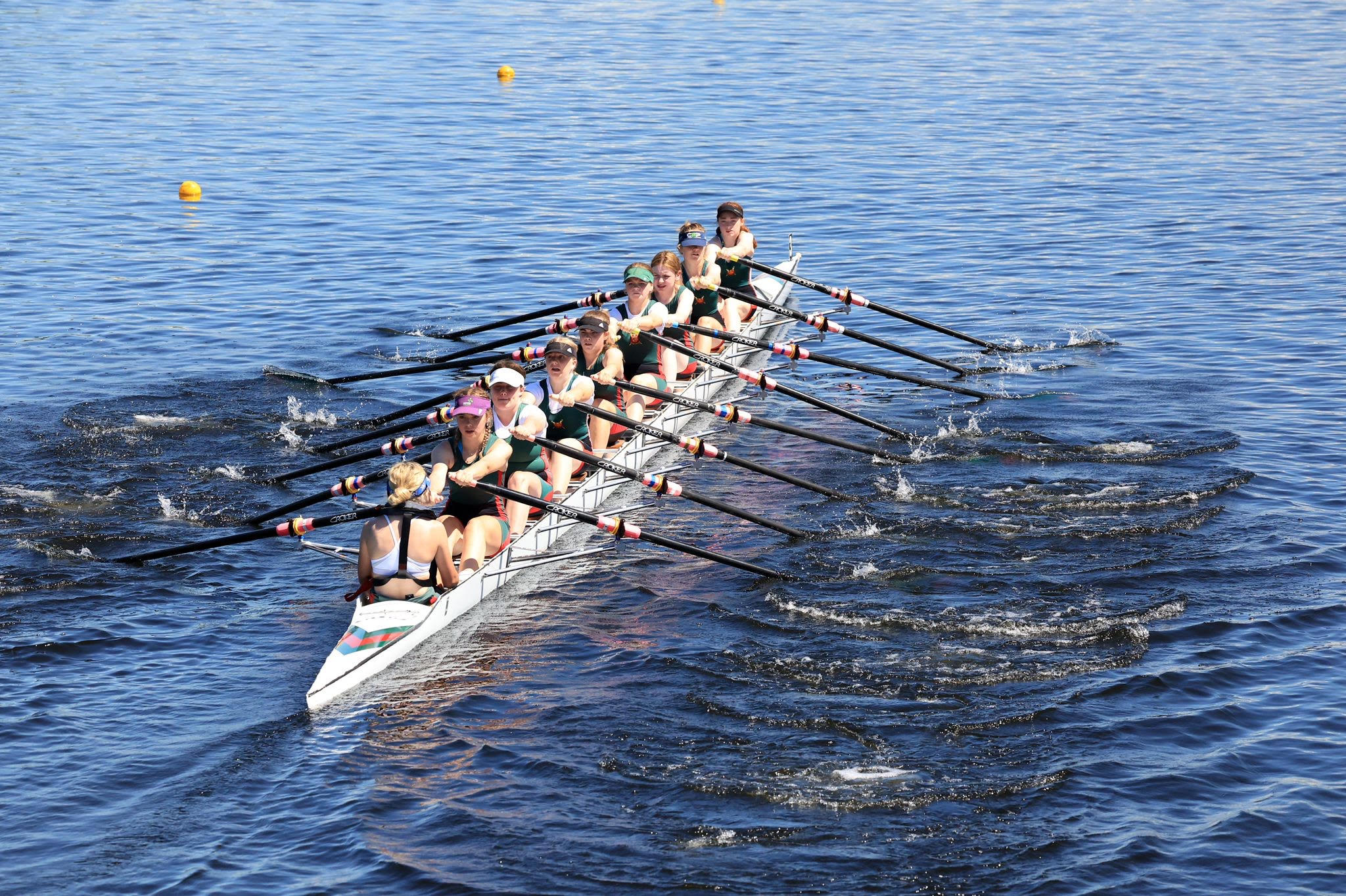